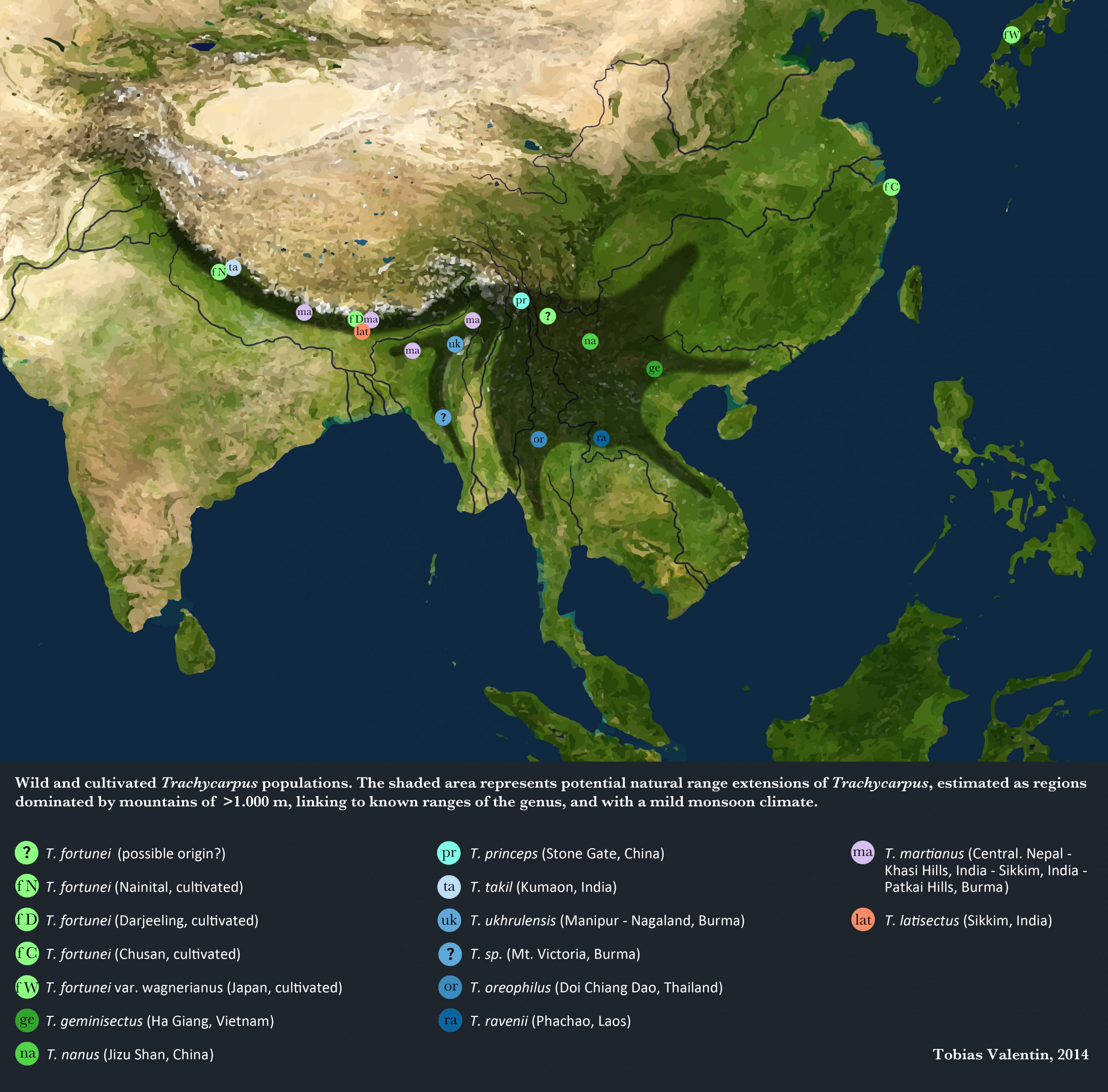 I find that a distribution map of Trachycarpus is missing on the internet and in palm literature.
So, I made this map. Enjoy.

The cold hardiness of the genus of Trachycarpus makes it exciting.

The natural distribution of the species exists within zones of subtropical mountain forest – from Indian Himalayas in west, to Southern China and Vietnam to the East.

Some species and forms are found by plant hunters in recent times. Undoubtedly, more species of Trachycarpus are hiding in that vast area, waiting to be discovered in the wilderness of the Himalayas and the Indochinese peninsula. Here, the biological diversity is high. Mountain ranges and weather systems meet in great complexity.

This is a note about palm adventures in Tramuntana, a chain of mountains that rises quickly from the Mediterranean Sea, 1,400 meters up, on the Island of Mallorca. Here, the palms grow lush in the lower parts of the mountains, and on the steep sea cliffs. In these mountains, I have had a great time in the company of Mediterranean fan palms on three different travels, last time in March 2013.

If you are visiting this island, then the Tramuntana mountains, and the spectacular natural habitat of the palms, will be worth the whole trip, no matter if you are a palm geek or not. Here, I will write a few notes on Mediterranean fan palms, and some observations from their natural habitat in the mountain chain. 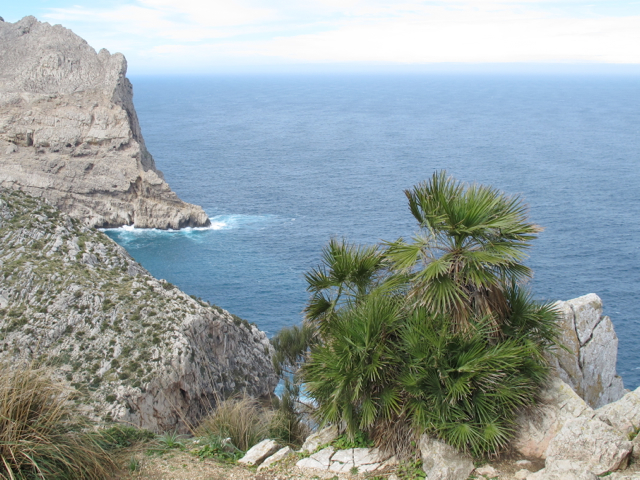 The northernmost natural range of any palm species, belongs to the Mediterranean fan palm. No other palm is distributed up to 43th latitude (Italy), though cultivated palms of course exists further to the north. The home of this species is the western part of the Mediterranean area, being one out of two palm species with natural range within Europe (the other one is Phoenix theophrasti).

Compact growth, and elegant, fan-shaped leaves, has made it a popular garden plant in all kinds of subtropical areas – from Tasmania to California. It belongs to the most cold hardy of all palms, though it isn’t hardy enough for a Scandinavian climate, even though it’s rather closely related to the hardy Windmill palms (Genus: Trachycarpus), that even grows outside in Copenhagen’s Botanical Garden (see earlier notes).

I had the honor of seeing the palms natural habitats in beautiful surroundings. The mountains of Tramuntana are like a model of romantic landscape paintings. Pastoral landscapes of weathered rocks, and dry grass meadows in a melancholic grey green color, blending with forests of evergreen oak and pine. 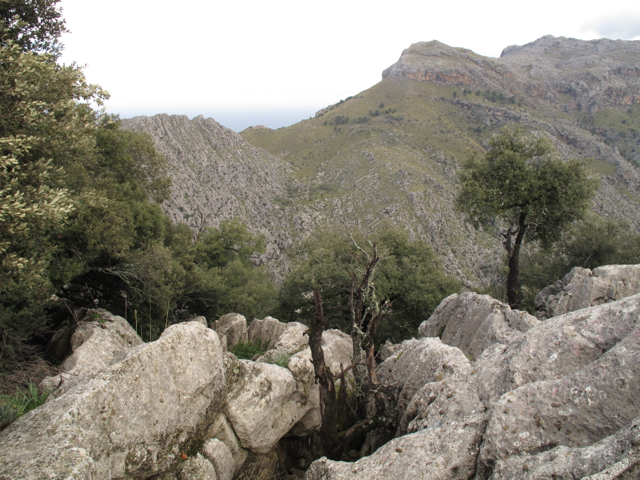 This Arcadian landscape has inspired Frederyk Chopin, when he, during winter 1838-39, stayed in the middle of the mountain range, isolated from the World, in a monestiary. He composed at a simple piano. He explored the essentially natural, and a World of old.

The palms and the natural scenery are on his mind, before he retreats to the mountains. In a letter to his friend Juli Fontana, Chopin writes: “No doubt I will go and live in a charming Charterhouse in the most beautiful country in the world; the sea, mountains, palm trees […] and age-old olive trees…!” In reality, his journey became an obscure and troublesome ordeal, but that’s  another story.

Where do the palms grow, and what kind of habitats?

Tramuntana is a lovely place to explore, if you like mountains and nature. But the palms doesn’t just grow all over the place, of course.

My observations so far, are that the primary mountain habitat of the Mediterranean fan palms are between 50 – 300 meters a.s.l. Only rarely have I seen them growing by the shoreline, and probably never above 400 meters a.s.l.  Especially, the palms can be seen in the southwestern and northeastern parts of the mountain chain. In places, they inhabit, they often settle in numerous groups.

First time, I saw Mediterranean fan palms in the wild, was in 2004. I ran to top of Puig de San Martí, ecstatic to be surrounded by thousands of Nature’s own lovely, wild palm trees. An interesting thing to observe, was this: here, and in other stretches of land in the mountains, I have seen quite a few burned palms.

That can be seen in the picture below, taken on one of the windswept, dry mountain tops, where the Mediterranean Sea is frothing below the cliffs. Fierce wildfires are an essential part of ecosystem dynamics here. The sea can be vaguely seen in the background. In the photograph to the right are some palms, and I stand to the left – with longer hair than today. 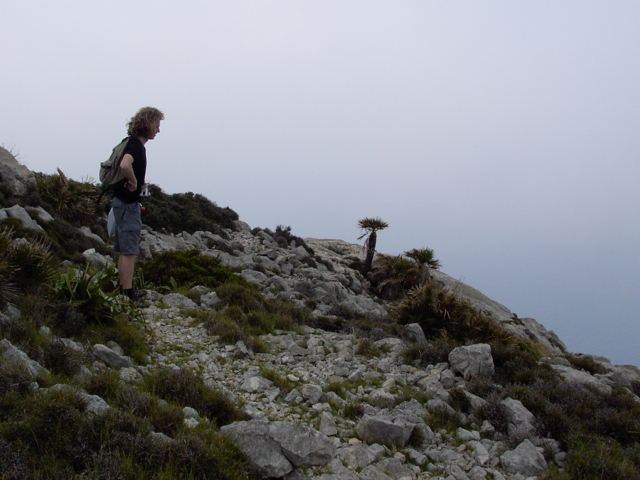 So, open areas with garrigue, shrubland and grasslands some of the types of habitats, that this palm is associated with. Mediterranean fan palms endures fires, and the otherwise merciless grazing from goats, that has damaged ecosystems in the Mediterranean area. 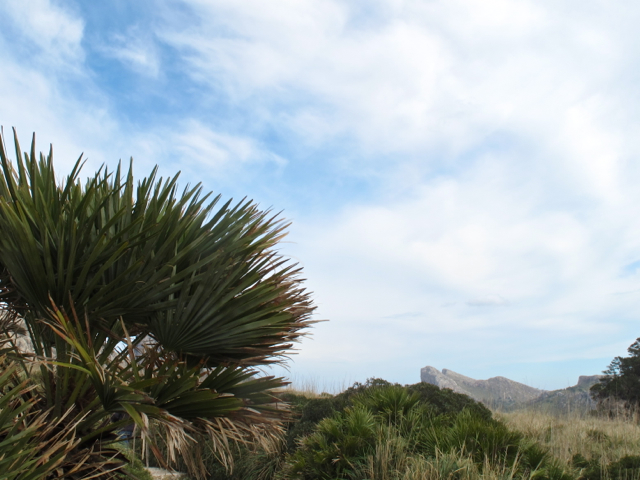 In Tramuntana, one can also see the fan palms growing in open woodland situations, in forests of Holm oak (Quercus ilex) and Aleppo pine (Pinus halepensis), on rocky outcroppings, that allows for a good amount of light to reach the forest floor. We don’t find Mediterranean fan palms in areas, where the tree canopies are closing entirely. 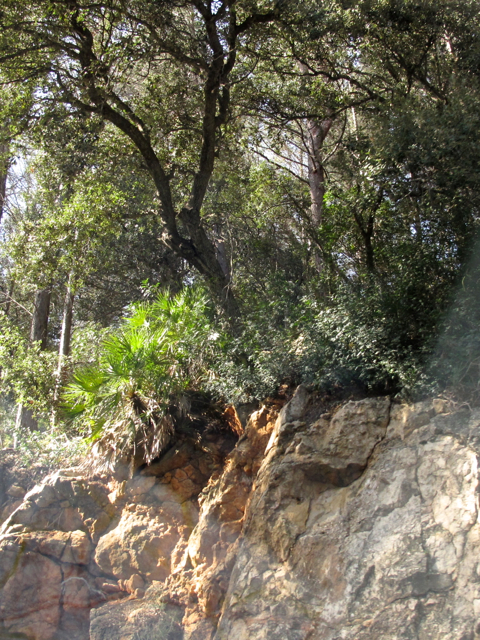 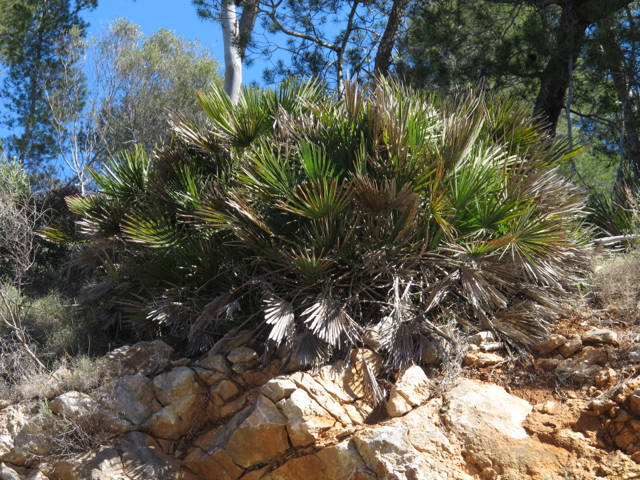 In the wild, this fan palm is really a dwarf. The trunk is rarely taller than 1 meter. The tallest specimens are the ones you see in mountain villages. Here, they have been taken into garden culture, and this way, they can become at least 4 meters tall. The palms thrive in the company of man, where no wild plants are competing about water and nutrition. In cultivation, this species can, in a first glance, remind a bit of some sort of Trachycarpus (hørpalme). 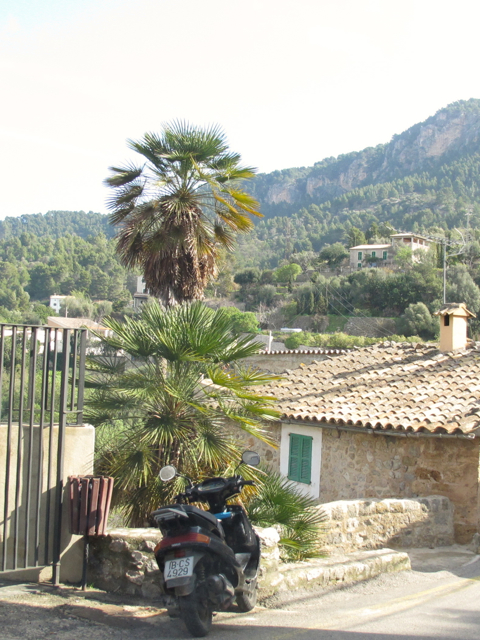 Well developed specimens in the wild, often grows on small shelfs on steep, North-facing walls of rock with good humidity. From a palm grower’s perspective, we are used to think of Mediterranean fan palms as sun loving plants. But that is mostly true, when they grow much north of their original sites. The summer drought of the Mediterranean climate, and the heat of the South, makes it advantageous for this palm to cling on to a relatively cool, moist environment. 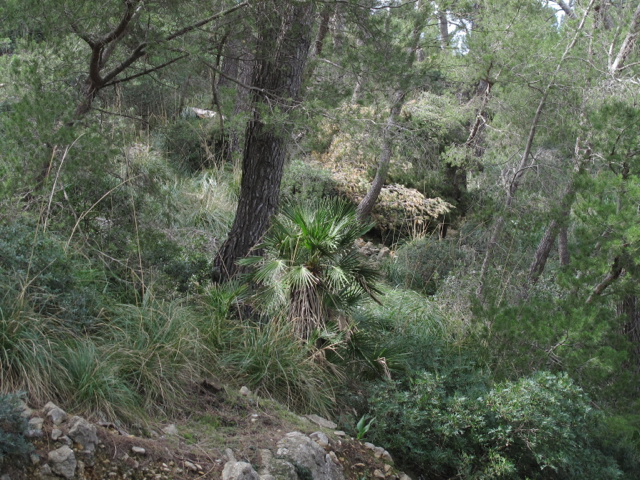 Cultivation in Scandinavia
Even though this species is the northernmost of all, their cold hardiness can’t be compared to e.g. the genus Trachycarpus. All my experiments with Chamaerops humilis outside, has failed, ending up with very brown palms, like here in 2005. 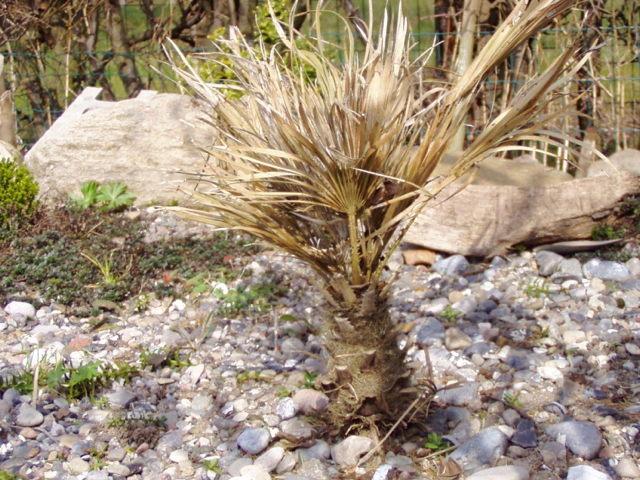 Copenhagen’s Botanical Garden has made the experiment as well, in a sheltered position outside. Cultivation has not been a succes. Nothing is left of these palms, except the label tag, now acting as a tomb stone. 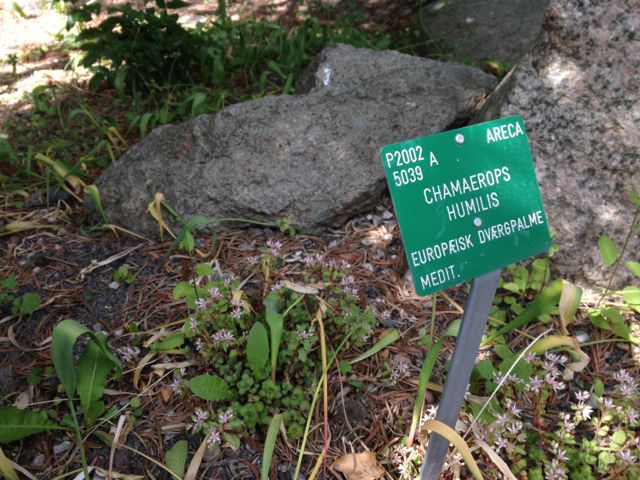 Luckily, handsome, happy fan palms can be seen in the subtropical greenhouse (“House 2”), close to the entrance in “House 1”.

The conclusion is, that unless you can offer the Mediterranean fan palm an unusually warm, sheltered position, it can’t really grow outside in Scandinavia. It should be grown under frost free circumstances, where it will be well pleased with very little care otherwise, if only watered and feed regularly during the growing season.

Mediterranean fan palms in other areas
It’s fun to see the palms in the wild. The Western part of the Mediterranean has many localities, where the plants can be studied. The much sought after form, called Chamaerops humilis var. argentea (or ‘Cerifera’) grows in the Atlas Mountains in Morocco. And who knows – maybe some special, yet unknown, varieties are still out there.

One way of preparing a palm watching trip in the wild, is to view the database called GBIF (Global Biodiversity Information Facility). Note that it also registers a few findings of cultivated plants, outside the relevant natural range of species.

Other sources for information are The International Palm Society og The European Palm Society.

Below is a photo from a natural history travel in Tunisia, where I found Chamaerops humilis growing among shrubs of Rosemary and Tree heather. 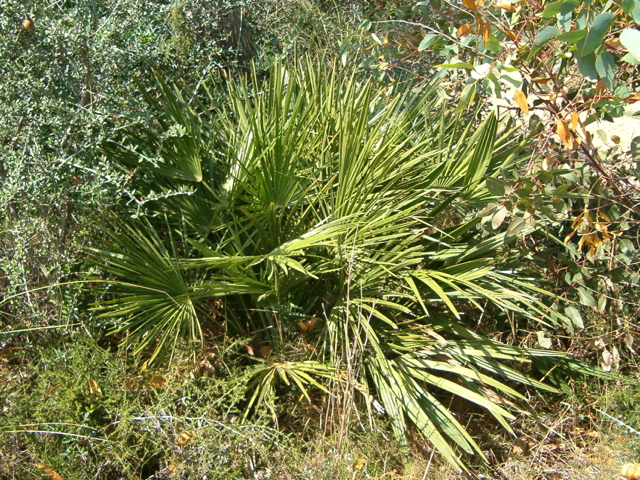 Warning: count(): Parameter must be an array or an object that implements Countable in /var/www/tobiasvalentin.dk/public_html/wp-includes/class-wp-comment-query.php on line 405